The most important water systems on S/V Lynx is the Watermaker.  This device turns salty sea water in to clear fresh water for drinking, taking showers, deck washing, cooking, cleaning, etc.  Water is vital to both our crew and the boat's well being, so we plan to have two Watermakers for redundancy.

The only question is, which brand do we plan to purchase?  There are a lot of choices, so let's take a look at some, and then we'll tell you which ones we plan to buy and why.

Spectra is one of the top brands of watermakers.  Their main claim to fame is their that they can run on renewable energy sources because of their a high-efficiency,  Spectra uses an extremely efficient Clark pump that uses a reversing valve to funnel the high-pressure brine water and waste flushed from the membrane and reroute it back so that it recovers the energy that went into pressurizing the feed water.  That helps to propel the new feed water taking its place.  This is an energy efficient method of separating fresh water. 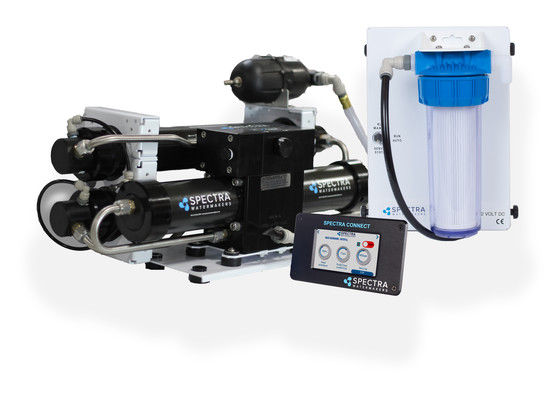 PROs: well made anti-corrosion parts what are available world wide.  it uses 48v so we can use these off or our main battery bank.
CONs: Mid-level pricing (though about half of Spectra).  Lower water output. 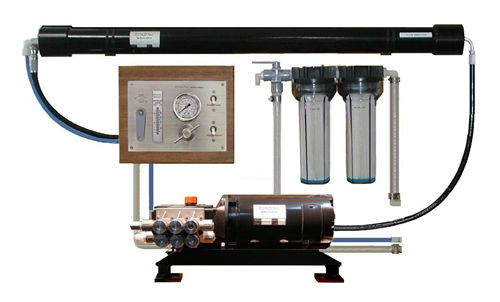 These are easy to install, operate, service, and repair.  They use no proprietary parts so you can obtain parts and service the watermaker yourself, at a reasonable price. 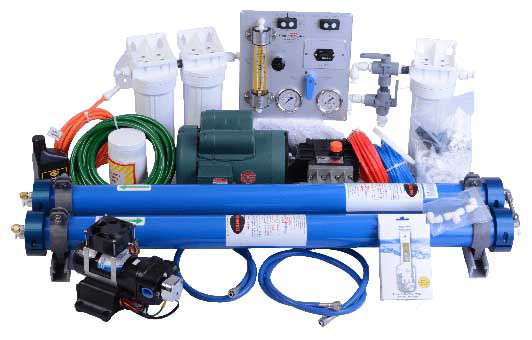 PROs: Easy and cheap to service, using off the shelf parts. They have a high volume output and are available at the best price around.  They are nearly half the cost of any of the other watermaker systems.
CONs: No worldwide service locations, but since they use off the shelf parts, this isn't an issue. 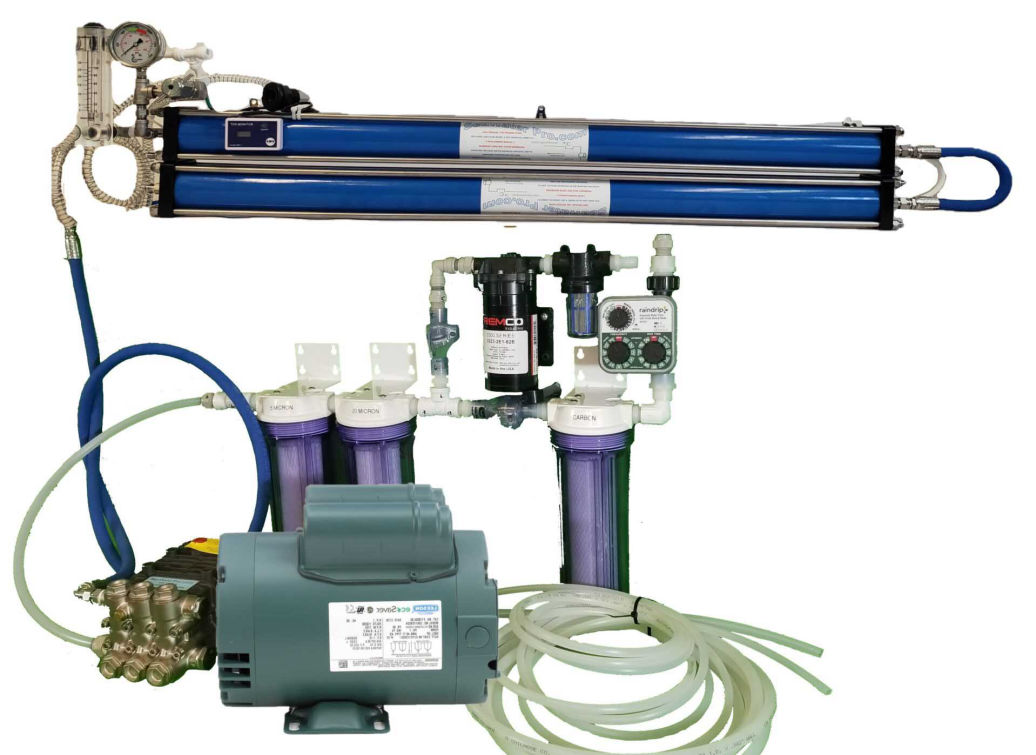 Our Conclusion on Watermakers

We can purchase two of the Sea Water Pro watermakers for the same price as one of the others (four if compared to Spectra!). If we choose to go with the duel membrane models, that means we can put out 64 gallons an hour with both running, filling our water reserve from nearly empty to full in three hours.  Being a 48v system, we can do this off of our main batteries instead of a diesel generator, using solar power to make water, but swiftly.  To fill our tanks the Spectra would take nearly fourteen hours.  We also obtain redundancy, in case one goes down.  Having two of the same watermaker means we only need one set of replacement parts on hand. The parts are also easy to get as they are off the shelf, and therefore, less expensive.

This is a pre-filter for any water we add to our tanks from an outside source, (not from our watermakers). That way, we aren't adding as much sediment or other particles into our tank. This sediment can be made up of pipe scale, sand, small bits of grass, rust, or may other types of sediment. Not all sediment is harmful to your body but this sediment can build up in your plumbing or collect at the bottom of your water tank. It can even get into your water pumps or other parts of your water system doing damage, so it is best to keep it out of your tanks.  For under $60, we can build a simple pre-filter from a clear filter housing.  It will use standard 9.5 inch common filters, found worldwide. 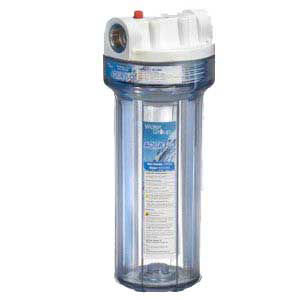 This is a secondary carbon filter we use to further remove particles and other things from our mostly, clean water tanks. This will likely be an inline filter setup right before the water passes through the UV filter (see below). 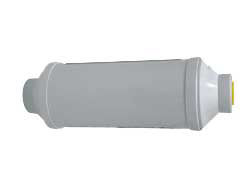 UV light kills bacteria, which the carbon filter will not handle.  The UV light needs to go just before the faucet (as close as possible so that no bacteria can form between the UV filter and where the water exits). This filter kills bacteria, viruses, and other pathogens.  It is chemical free, improves taste, removes odors, and has low power consumption from 12v power. 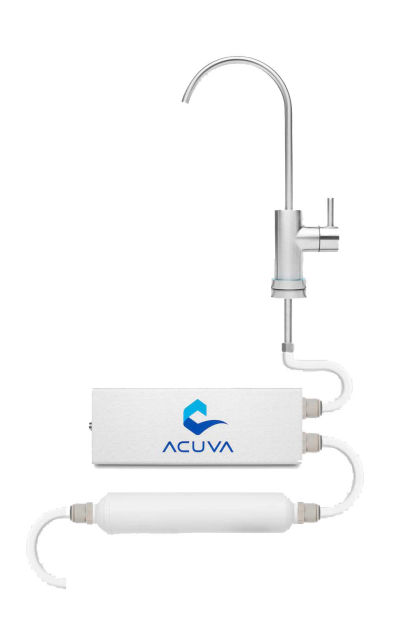 Water made from a watermaker is very sterile and pure, but that also means it lacks in the normal minerals that our body needs and taste buds desire.  So, this mineralizer adds those minerals back into our clean water. 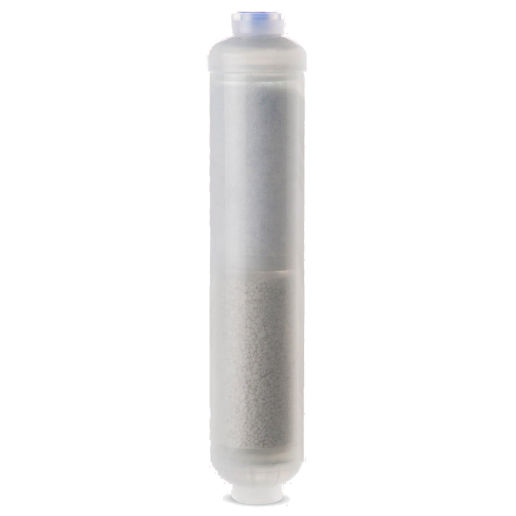 For preventing salt water from backing up the exhaust vent and siphoning into the engine itself when the engine is stopped.

By mounting a Vetus air vent at least 40 cm above the waterline this can be prevented. 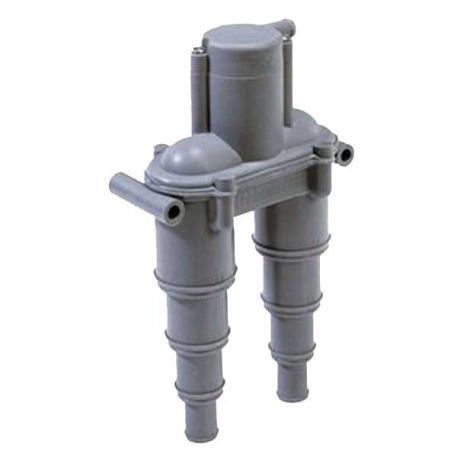 Our boat will have a standard water heating system run off of the diesel engine, however, there are issues with this system.  For the heads in the opposite hull, the run from the tank to the usage point will be long so it will take time to get the hot water to the shower head or faucet.   At other times, we may not have run the diesel engine for a long time so we have not made hot water.

Now, let's get this out of the way up front, these things use a lot of power and only give you modestly warm water.   Still, they can be useful.  For example, they can heat the cold water until the hot water arrives from the tank water heater, thus saving a lot of wasted water while you wait (or having to scream as cold water hits your naked body).  Also, in cases where we don't have hot water in the tank, we can get warm water for a quick shower.

There are many models of these, but here is a tankless water heater that looks decent: 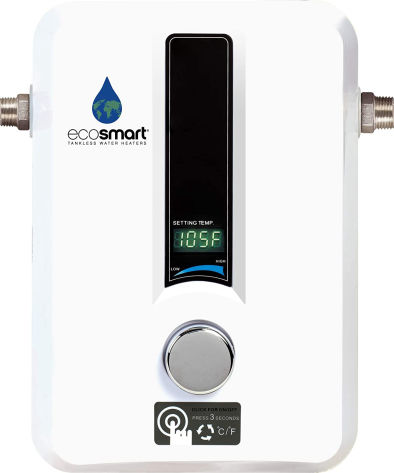 So, how much water do these electric tankless water heaters supply, at what temperature, and at what electrical cost?  The unit we are showing here uses about 32amps at 240vac. That converts to about 177amps at 48vdc (our main battery storage is 48vdc, 460ah). That means, if we had two of these units (one for each shower) we could run them for one hour, both at once, but that would fully deplete our batteries!  They would also pull 354 amps.   Though possible, we don't really want to do that!

Instead, we now plan to put one tankless water in the starboard hull, the port hull is a very short run from the waterheater to the heads.  That means only one of these will be running, and only occasionally for short periods.  We can live with 177amps per hour, and a shower should not take an hour!  If we practice military showers (turn on water to wet the body, then turn it off, soap up, turn it back on to rinse) we can limit the water running time to about 6 minutes through a tankless water heater.  That is only 10% of an hour, so we would pull about 18 amps from the batteries.

The units aren't too expensive and, as mentioned, we would only have one in the starboard hull.

Back to Top Back to Gear Page