When it comes to cruising on a sailboat, power is your most needed commodity.  From power comes water (watermakers), fuel (electric propulsion), air conditioning, heating, lights, cooking, cleaning, etc.  You can never have enough power.  And, with that said, the best way to get power is from solar panels.  The issue is, there is limited space in which to put solar panels on a boat.  Therefore, we want the most efficient solar panels that work in an environment that is often shaded due to masts, booms, and various lines.  Let's talk about shading next.

It is inevitable that panels will be shaded on a sail boat.  There are just too many things high in the air.  Masts, shrouds, spreaders, lines, and booms,  Therefore, our goal with solar panels is to have the least amount loss possible when a panel becomes shaded.  There are two methods of mitigating this problem, the first is diodes and the second, MPPT solar controllers.  Let's look at each options (below) starting with diodes. 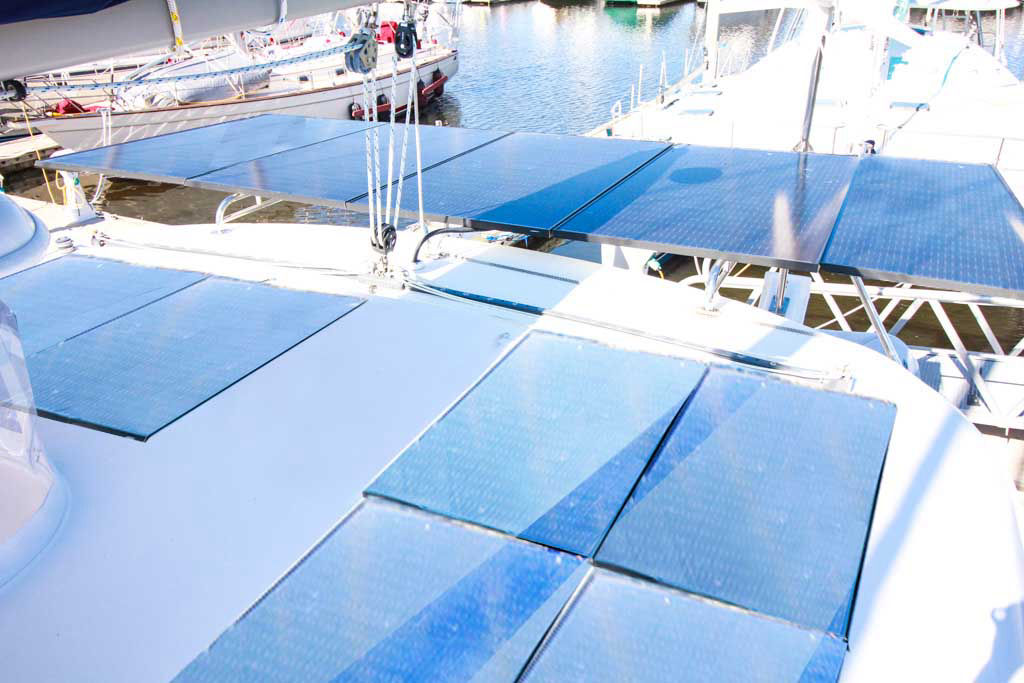 A diode is a very simple, though important, thing.  It is a piece of electronics that only allows power to move in one direction through the diode.  These can be used to skip over a single solar cell that is shaded, allowing the other cells to keep on working.

Unfortunately, as of now, there is only one solar panel manufacturer we know of that offers panels with a diode per solar cell, Sunpower.  The issue with Sunpower is twofold, they are very expensive, and if you put them on a sailboat, it voids the warranty.  So, you are paying a king's ransom so that you have the best panels with a long warranty, and you don't get the warranty.  So what are our other options?  Enter half-cut cells with diode strings.

Diode strings place a diode at the end of every two rows, making a loop that can be skipped if part of it is shaded, the other two sets of looped rows still send full power.  Half-cut cells do exactly what they say, they cut each square solar cell in half.  Then, the panel is divided into two separate panels (see the thicker line down the middle, (pic right).  Each loop of two line has a diode, but instead of just three loops, due to the half-cut sells, there are now six shorter loops (see purple arrows).  This gives you a much better chance of not losing the entire panel due to shading, though not as good as a diode per cell.  However, these come at a fifth the price of Sunpower and they keep their warranties even on a boat. 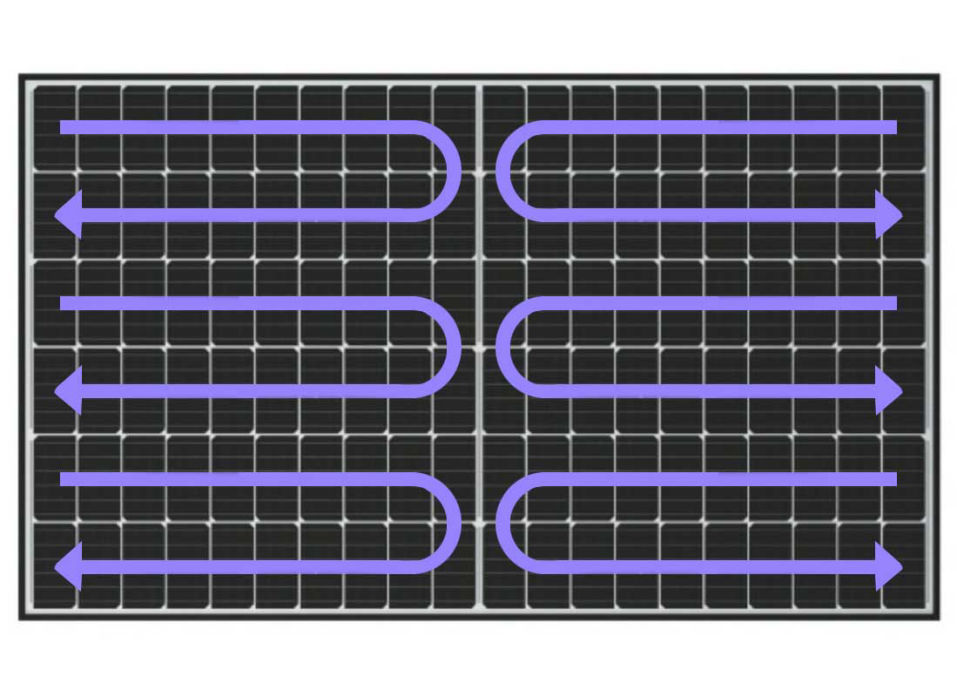 Solar charge controllers are a necessity for getting the most out of your solar panels.  They can take higher voltage and reduce it down to what your batteries need as well as cut off the power when the batteries are full.  However, when it comes to shading, they have another advantage.  Even with Diodes, there are losses caused by shading.  By isolating two panels to their own MPPT, some of these losses are saved because when a panel is shaded, it has no effect on the next set of two on a different MPPT.  Of course, this costs more, since one MPPT can handle many solar panels, but this is the most efficient method of getting all the power you can from your panels.
Note: We would put one MPPT per panel, but the panels would not always supply enough power to the MPPT in lower light situations,  The panels below put out 42-49 volts, maximum. and that would cut off any charging since they panels must supply more voltage than the 48v output of the MPPT.  Now, if we wanted to add a Boost device to each panel's output, we could go with one MPPT per panel, but this is added complexity and cost.

We are planning to go with Victron SmartSolar charge controllers, MPPT 100 | 20, for 48 volts.

Now that we know we want half-cut, diode protected, solar panels, each hooked to their own MPPT charge controller, we have to decide on which panels to purchase.  Below are a list of our top contenders for solar panels.

We have had reports from boats of their walk on panels not lasting well so, most likely, we will go with hard panels. We really like the Sunpower E Series due to the partially shaded benefits of the Maxion individually diode bypass cells. However, Sunpower voids their warranty if panels are installed on a boat! And, at around $13,000 to put them on, that's a big risk.

We could go with JA Solar, Canadian Power, or Bluesun panels, each of which have half cut cells and three diodes (both help with partial shading losses). Their efficiency are similar, with the two monocrystalline panels (Ja and Bluesun) being slightly higher.

The price on all three are excellent! However, looking at the two monocrystalline panels, the Bluesun are $11.00 per panel cheaper but put out a higher voltage. We could use any of these three manufacturers and the total cost of the panels would drop to around $1,800 (that's an $11,000 savings!). All three have a 25 year warranty.

So, compared to the Sunpower cells, how much is that extra % of partially shaded advantage worth to us? It's not worth $11,000, with no warranty. So, right now, I'd say we might go with the JA Solar panels (they have had some good reviews, as well) because they have a higher voltage output than the Bluesun panels but the same efficiency. The price is is slightly more than the Bluesun, and all total would cost an extra $110 (figuring ten panels).

Another option we are considering are the new REC 405 watt panels. These are higher efficiency panels and they use gapless technology. This makes them smaller as they are slightly higher watts per inch. However, they are more than three times the price! We'll have to see just how critical it is to have slightly smaller panels (eight inches shorter). If the spacing doesn't matter, we can go with the less expensive Ja Solar panels, or we can do a mix, if there are areas (like on top of the Helm Cover) that have limited space we could use the REC panels.

Finally, we do like the Panasonic panels for their higher working temperature. Since we will be in a lot of hot places, this really matters when some of the other panels will drop their output significantly. They are also one of the longer lasting panels, with 92% output after 25 years. That means they won't drop much on us as we go on in years. However, they are a lot more expensive than the Canadian Power panels.

Our thought is to spend less initially, and replace the panels in five to ten years with something better. So, the cheaper price panels have an advantage, we can swap them out for newer and better solar technology in a few years.

Why do we need so much solar?

So, to recharge 30 kWh, we need about 6 kw of solar.  So, how do we get there?  That depends on which catamaran we purchase.  Right now, the Leopard 48 is the only model that can get us close to that since it has the most space available on the coach roof.  However, by adding an arch to the back of the Helia 44, Leopard 46, and Salina 48 we can improve their solar capacity, though we will still fall a little short.  See the boats below to see just how much we can achieve on each boat.

Seven 550 w Solar Panels on the arch and two 440w panels, one on the coach roof and one on the Helm roof gives us 3,630 watts.  That is a bit very underpowered for our needs,  Also, the solar arch and panels would extend a little past the stern.  The Helia 44 has the upper seating area on the salon roof, which cuts down solar panel opportunities.

Five 550w Solar Panels on the arch and seven 200w panels gives us 4,150 watts, similar to the Helia 44,but getting just over 4kw.  This is quite a bit underpowered for our needs, though slightly better than the Helia 44.

Back to Top Back to Gear Page